Weighing the Park Mine Extra

The Park Mine Extra services the coal mines on the Park Branch of Greg Long's D&RGW Montrose Division. Upon its return from the branch, the Park Mine Extra weighs it loaded hoppers in Olathe Colorado. The Grande's substantial standard and narrow gauge yard in Olathe is in the background of these photos.

All photos are courtesy of Greg Long.

Upon arrival in Olathe, the veteran crew of D&RGW 2-8-2 Number 1225 breaks their train and pulls a "handle" of four hoppers past the scale. The break was made just beyond the yellow building above the third hopper.

After the head brakeman throws the switch for the gantlet scale track, the K-63 class engine shoves back to reconnect the train. 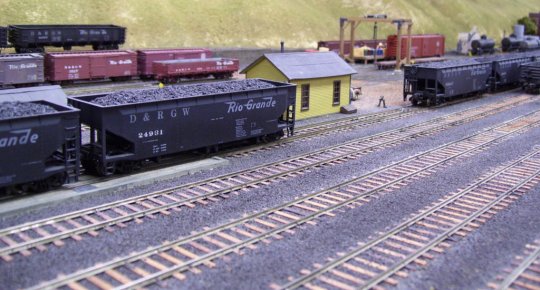 The switch at the other end has also been thrown for the gantlet scale track, and here comes the handle for the joint. The Olathe scale house is hidden by the two hoppers on the left.

The entire train is now lined for the scale track, and all but the engine will travel across the scale. 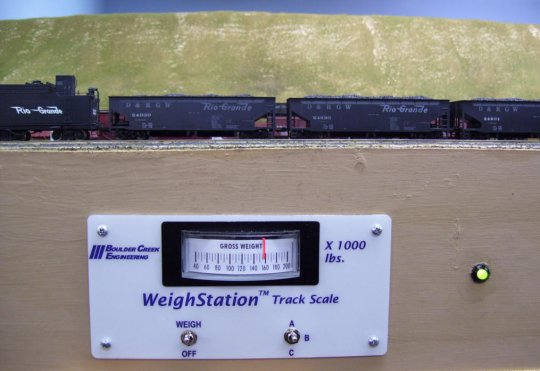 As Number 1225 pulls the train across the scale, the second hopper (D&RGW 24890) has its turn and clocks in at 157,300 lbs. The green light alerts the crew that the scale attendant is ready for the next car. (The Meter Display version shown here is no longer available.) 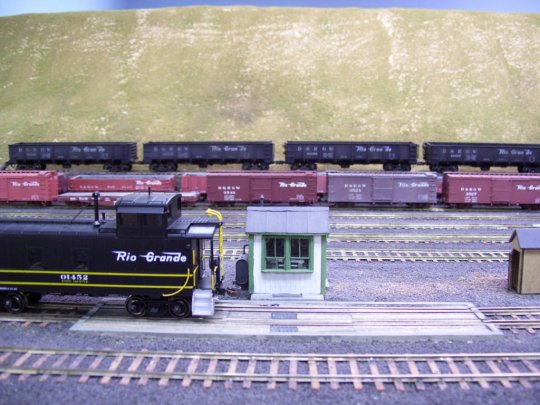 The scale attendant has locked the beam and the Park Mine Extra caboose crosses the scale in this nice shot of the Olathe scale house. Before the Extra leaves town, the rear end brakeman will lock both gantlet track switches for the main line.